It’s been four months since E-Comm became the first point of contact for 9-1-1 callers in the Upper Fraser Valley, and to date almost 17,000 emergency calls have flowed through the communication centre.

“The positive working relationship that was established between our two organizations during the initial transition process has continued to grow stronger,” said Randy Castle, Manager of E911 and Information Technology for the Fraser Valley Regional District (FVRD). “I look forward to continuing to work together in pursuit of our shared goal of ensuring communities within the Upper Fraser Valley receive high-quality 9-1-1 service 24/7.”

At 8:49 a.m. January 19 E-Comm began receiving 9-1-1 calls. The first came in just one minute after the switchover and was a call for the RCMP in Chilliwack. Approximately 60,000 emergency calls per year will now be routed to E-Comm’s communications centre where they will be answered by an E-Comm call-taker before being transferred to the requested agency. Police calls continue to be sent to the Chilliwack RCMP, fire calls to the Fraser Valley Regional Fire Dispatch Centre and ambulance calls to the BC Emergency Health Services dispatch centre in Vancouver. 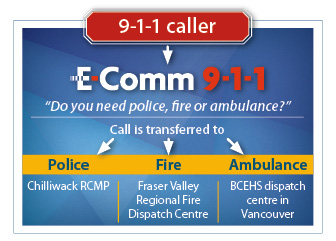 “The positive working relationship that was established between our two organizations during the initial transition process has continued to grow stronger.”

This transition, the fifth of its kind in two years, has resulted in E-Comm now handling 88% of the province’s incoming emergency calls.

“A great deal of hard work and months of planning went into making this transition a success and none of it would have been possible without the collaboration and hard work of teams from E-Comm, the Fraser Valley Regional District, the RCMP, Fraser Valley Regional Fire Dispatch, BC Emergency Health Services and TELUS,” added E-Comm President and CEO David Guscott.

E-Comm answers 9-1-1 calls for 25 regional districts and communities spanning from Vancouver Island to the Alberta and U.S. borders, to north of Prince George. Learn more by visiting ecomm911.ca.