As the summer turned to fall, the focus of construction work on the new South Island 9-1-1/Police Dispatch Centre in Saanich shifted to the building’s interior. E-Comm has begun installing furniture, fixtures and equipment throughout the entire centre. With substantial completion of the building’s exterior, the final construction push is underway, with crews focused on a few remaining items including landscaping and exterior siding.

“This state-of-the-art facility is just beautiful,” said E-Comm Board Chair Doug Campbell, after touring the construction site in September. “The workspace for our 9-1-1 call takers and dispatchers is bright and comfortable. I look forward to seeing the building come alive when our team moves in and begins operations to support the public and police on the South Island early next year.”

Once the Capital Regional District wraps up the final requirements for the building occupancy permit, it will hand off the building to E-Comm for additional technical and operational outfitting.

“The building construction is heading into the final phases with concentration on the exterior work including the security fence, curbs and walkways and completing the building siding,” said E-Comm Program Manager Brian Ackles. “Inside, we’ve started to put the required technology in place to support the new operation and we are on track to have everything ready before the end of December.”

In August, crews erected the main radio tower that will serve the new centre. E-Comm’s technology team is working closely with representatives from CREST—the company responsible for managing the radio network used by South Island police agencies—to ensure that the system will be connected and fully operational at the new centre.

Crews completed the server room’s fit out in September, allowing technicians to establish a secure network connection between this centre and E-Comm’s call-taking and dispatch centre in Vancouver. This means both centres can seamlessly communicate with each other.

As the new South Island 9-1-1/Police Dispatch Centre amalgamates 9-1-1 call-answer and police dispatch services for Victoria, Saanich, Central Saanich, Oak Bay Police and local RCMP detachments, E-Comm has been working with all these agencies to develop a staff training program and a consolidated list of policies and procedures for handling calls. From a caller’s perspective, nothing will change for South Island residents when the new centre opens in early 2019. They’ll continue to call 9-1-1 when they need police, fire or ambulance service.

Once the consolidated centre is fully operational, it will handle an estimated 95,000 emergency 9-1-1 calls annually. In 2019, E-Comm will be answering 99 per cent of 9-1-1 calls in B.C. between its two centres in Vancouver and Saanich.

The Vancouver Police Department (VPD) credits the new E-Comm Wide-Area Radio Network with helping to nab a man who allegedly drove across the border into Canada from the United States without stopping.

At 8:20 a.m. on September 15, Surrey RCMP notified Vancouver police that a man driving a blue pick-up truck with Oregon licence plates had driven through the border minutes before, without stopping and was speeding towards Vancouver. VPD officers located the truck a short time later on the west side of the city. They attempted to pull the vehicle over using lights and sirens, but the driver refused to stop, so officers pursued. The truck collided with another vehicle and then police arrested the suspect. The suspect from Oregon has been charged with dangerous operation of a motor vehicle and flight from a peace officer.

“The radio equipment used by first responders across the Lower Mainland allows them to talk to each other during emergencies,” said VPD Constable Jason Doucette. “Efficient communication between agencies led to the swift arrest of this man who made unauthorized entry into Canada.”

Earlier this year, E-Comm and its partners completed the planned replacement of the Wide-Area Radio Network. More than 30 police, fire and ambulance agencies from Lions Bay to Abbotsford communicate on the network.

As part of the project, E-Comm deployed approximately 8,000 new or upgraded radios. Interoperability between all emergency service agencies means a safer working environment for first responders as police officers can communicate with firefighters or paramedics on the same, secure digital radio channel.

Below are some recent examples of how agencies are using the new equipment and the interoperability features of the new radio system to respond to emergencies and enhance public safety.

Richmond Fire-Rescue used its new dual-band radios to communicate with provincial wildfire crews during a very stubborn fire in the city’s nature park in July. With shared talkgroups, city firefighters could communicate directly with B.C. Wildfire Service’s aircraft to help extinguish the blaze.

In August, firefighters with Surrey Fire Service were able to communicate directly with their counterparts at Langley City Fire Rescue Service to battle a large commercial structure fire on the border between the two cities. With separate tactical talkgroups patched together, unified communications helped crews deal with this incident. Langley City Fire Rescue Service joined the E-Comm Wide-Area Radio Network on April 17.

Interoperability isn’t just for emergency response. It can also help organize safety services for big public events. Coquitlam RCMP was also able to use, for the first time, a Police-Fire-Ambulance command talkgroup with Port Coquitlam Fire & Emergency Services during the PoCo Grand Prix cycling races in July. They shared a command centre and pre-planned the communications, which improved the management of calls during the event. Port Coquitlam Fire & Emergency Services also recently joined the radio system (February 2018) giving this communications power to the city for the first time.

It’s been a year since I joined the E-Comm team and I can’t believe how fast the time has gone by.

On my second day on the job, the Abbotsford Police Department transitioned 9-1-1 call-taking and police dispatch services to E-Comm. When I recently saw Chief Constable Bob Rich at his retirement celebration, I was struck by how much progress E-Comm has made in achieving its public safety mandate since he and I first met: from completing the upgrade of the Metro Vancouver-wide radio system to making tremendous progress on a new 9-1-1/Police Dispatch Centre on southern Vancouver Island, to welcoming new radio and dispatch partners, a lot has been accomplished. And there’s much more to come.

My major focus since joining the organization has been planning for the future through the development of a new strategic plan—the roadmap that will help guide E-Comm as we contribute to public safety in British Columbia. Throughout September, I met with many municipal stakeholders and emergency service partners including police, fire and ambulance leadership, to provide an update on the strategic planning process and to validate the core commitments of our plan. These visits have been a key part of ensuring we are all aligned when it comes to the goals and strategies that will help shape the future of E-Comm and our work. I look forward to sharing more about our strategic plan as we work toward a formal launch in the spring of 2019.

As we’ve seen from events this past summer, both here at home and abroad, the world is far from perfect. When major events hit such as forest fires, flooding and more recently in Canada—tornadoes—public and responder lives are put at risk. When this happens, it’s imperative that as providers of emergency communications, we are able to adapt and ensure the proper resources are in place to deliver the required level of public safety services. With that in mind, I’m pleased to report that E-Comm has begun work on a new training facility that is also capable of providing enhanced back-up operations for our 9-1-1 and police and fire call-taking/dispatch services. This project is an important undertaking that reflects our ongoing commitment to pursuing the highest level of technical and operational reliability. We anticipate this new facility will be operational by early 2019.

Our priorities for the rest of 2018, and into early 2019, will include ensuring everything is in place to support a successful Go-Live for the new South Island Centre. Final technical and operational outfitting work is underway and we anticipate receiving the keys to the state-of-the-art facility by the end of November—an exciting moment we have been looking forward to since the new consolidated centre was announced in February 2017. We will also continue work on finalizing our strategic plan and ensuring the resources are in place to cultivate a great workplace for our employees.

I would like to end this update by saying just how proud I am to lead this organization and to be part of the public safety community. Over the course of this past year, I’ve been fortunate to spend time getting to know our incredible staff and to see firsthand the ways in which our teams support the life-saving work of frontline police officers, firefighters and paramedics. It has been an amazing and gratifying first year for me. Thank you.

On September 20, E-Comm welcomed Brent Asmundson (representing Village of Belcarra, Cities of Coquitlam, New Westminster, Port Coquitlam and Port Moody) to the 2018-2019 Board of Directors.

The full list of the 19-member Board of Directors is available here.

E-Comm staff were engaged in a social cause this summer as they fundraised for, and rode with, Cops for Cancer in support of the Canadian Cancer Society.

Cops for Cancer is an annual event in which more than 100 emergency services personnel from across British Columbia cycle for two weeks to raise funds for the Canadian Cancer Society. E-Comm has been supporting this initiative for 12 years, but this year was different. For the first time, staff were invited to participate as guest riders for one day and joined either the Tour de Coast, which involved cycling the Sea-to-Sky Corridor, or the Tour de Valley, which focused on cities south of the Fraser River.

“I was delighted to be selected to participate as a guest rider in the Tour de Coast,” shared Mike Skelton, a project manager with E-Comm’s Technology Services department, and an avid cyclist. “It’s a great cause and a wonderful opportunity to help the Canadian Cancer Society raise money to support research and caring programs.”

Skelton, along with his colleagues in E-Comm’s Operations department—Cameron MacPherson, Rocky Tees and Shanna Raffan—each met their goal of raising $1,500 through company-wide and personal fundraising initiatives. Efforts began in July with breakfast fundraisers, raffle tickets and a 50/50 draw. “The support was overwhelming,” noted MacPherson. “We were able to raise awareness for a great cause, and had a really good time doing it.”

He also shared that the motivation for him to get involved was the kids impacted by cancer. “I have kids of my own and I want them to have the chance to just be kids. To think there might be young children out there who aren’t getting that chance because of this terrible disease—wanted to get involved and do something about it. This money can support various caring programs for children, such as Camp Goodtimes. Everyone’s passionate about something and I’m glad I was able to get involved for a cause I care about.”

Both tours visited multiple schools, community events and businesses to raise funds and awareness about cancer prevention. On September 24, the Tour de Coast visited E-Comm and received a $7,500 donation for the Canadian Cancer Society. The cheque represents a combined total of E-Comm’s corporate donation and all the money raised by E-Comm staff.

E-Comm attends a number of community events throughout the year to connect with British Columbia’s neighbourhoods and to share public safety information and 9-1-1 tips. From July – September, E-Comm attended five community events. A photo galley showing E-Comm’s participation in events is available here. 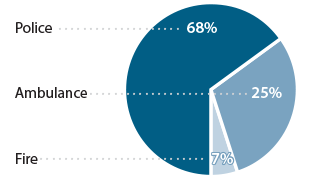