“An outstanding example of collaboration, partnership and hard work”

It’s been a busy kick-off to 2019 for E-Comm and our public safety partners, marked by the start of operations for the new South Island 9-1-1/Police Dispatch Centre.

Located in Saanich, this state-of-the-art, post-disaster facility consolidates 9-1-1 call-taking and dispatch services for police agencies in Victoria, Saanich, Central Saanich and Oak Bay, along with 11 RCMP detachments. The centre, constructed and owned by the Capital Regional District and operated by E-Comm, is now serving communities from Ladysmith to Victoria.

“We have started 2019 with a great enhancement to public safety communications in British Columbia,” said E-Comm President and CEO Oliver Grüter-Andrew. “This initiative is an outstanding example of collaboration, partnership and hard work.”

Before this new centre, 9-1-1 call-taking and dispatch services for central and southern Vancouver Island police agencies were handled out of three emergency call centres in Langford, Saanich and Victoria.

Staff from those facilities moved to the new centre over a two-week transition period from January 22 to February 5. Just seconds after the first official cutover at 7:47 a.m. on January 22, call taker Tammy Gibbs answered the first 9-1-1 call—a request for the ambulance service.

Consolidation and efficiency were key factors in developing this project, according to Saanich Police Chief Constable Bob Downie, who is a co-chair of the steering committee for this initiative. “The coordination between different police units is made better by having a single consolidated centre,” said Downie. “It’s all done here, it’s all done seamlessly, it’s all done under one management team, and the region’s going to be better served because of it.”

“I can tell you what you’re seeing here is exactly what the vision for this project was right from the beginning,” added Lois Karr, director of Operational Communications Centre Program for the RCMP and a co-chair of the steering committee. “It’s been amazing to watch it all come together.” She also praised the role of emergency call-taking staff. “We all know that call takers and dispatchers are the first of the first responders and how crucial their job is.”

E-Comm is expected to handle approximately 95,000 9-1-1 calls per year through the Vancouver Island centre. Combined with its operations facility in Vancouver, the largest 9-1-1 centre in B.C, E-Comm will now be handling 99 per cent of the provincial 9-1-1 call volume. In 2018, E-Comm answered approximately 1.6 million 9-1-1 calls.

“I applaud everyone who worked so diligently over the past two years to bring this transition to Vancouver Island’s first post-disaster emergency communication centre to fruition,” praised Grüter-Andrew. “But the work is not over by any means. We look forward to our new public safety partnerships and working together with police agencies to keep the residents of these Vancouver Island communities safe.”

9-1-1 headscratchers: calls in 2018 that didn’t belong on the emergency line

For the sixth year in a row, E-Comm’s year-end media outreach initiative drew great interest from B.C. newsrooms and on social media.

Call taker Heather Andrews handled the fast food restaurant complaint and says when someone calls 9-1-1 just to complain about customer service at a business, time is taken away from helping people with real life safety issues.

“This type of call ties up our ability to help people with real emergencies. Dealing with a complaint about the opening hours of a restaurant is a call that doesn’t belong on 9-1-1.”

Consumer complaints—ranging from a store not accepting return of shoes without their original box to a restaurant not honouring a coupon—were a common theme on this year’s nuisance call list. Callers with vehicle questions such as asking for help to turn off headlights and reporting their windshield wipers had stopped working also make their way onto the list.

Call taker Kayla Ryan handled the call about a shoebox question. “We are here to help people in emergency situations,” said Ryan. “When someone calls 9-1-1 for general information, we still have to confirm the person is safe before completing the call. Calling the police to complain about a store’s return policy isn’t a reason to call 9-1-1.”

The focus of the annual campaign is to bring attention to how calls like these can impede someone from getting help, according to Jasmine Bradley, E-Comm Corporate Communications manager. By publishing  the list, the goal is to remind the public that 9-1-1 is for police, fire or medical emergencies when a response is needed right away. “Most people use 9-1-1 responsibly,” said Bradley, “but calls such as those on this year’s headscratcher list waste valuable emergency resources that would otherwise be available to someone whose health, safety or property was in jeopardy or a crime was in progress.”

E-Comm compiles its annual 9-1-1 headscratchers list from calls submitted by its call-taking staff. 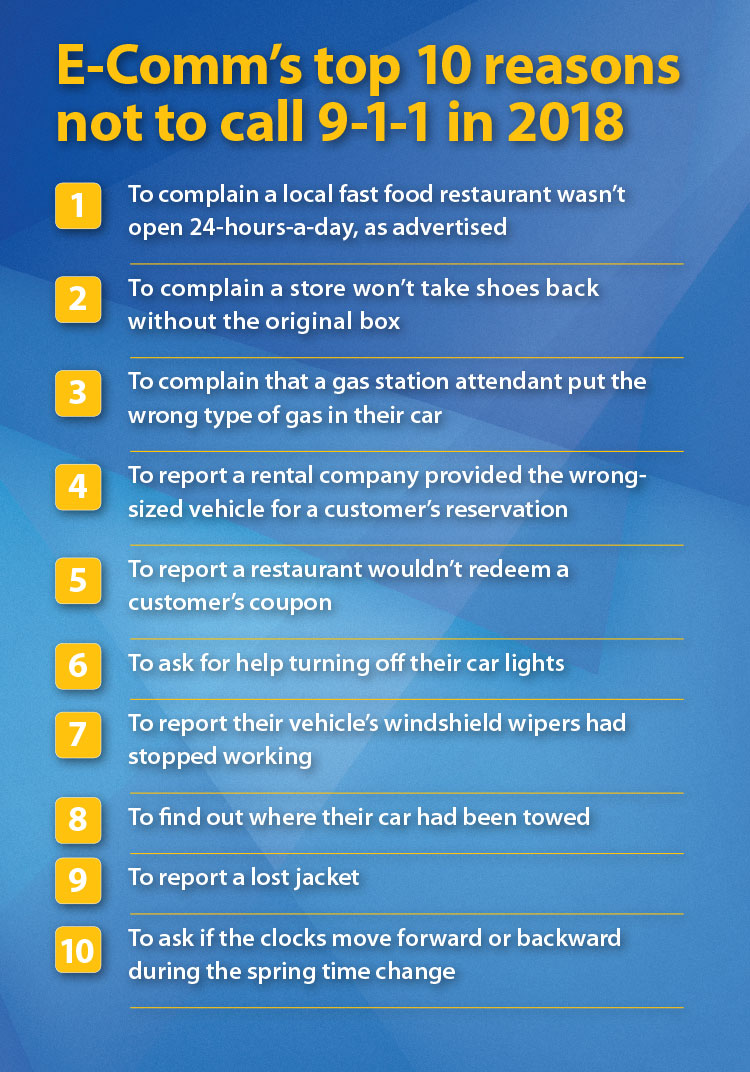 Opening an emergency communications facility requires a significant collaborative effort and the new South Island 9-1-1/Police Dispatch Centre is a shining example of what can happen when people with the same vision and passion for public safety come together.

I would like to thank everyone, in particular members of the South Island Steering Committee, who worked with E-Comm staff so diligently over the last two years to keep this project on track. We look forward to the official opening of the centre in March. Our public safety footprint expanded again in February when we welcomed fire departments in the Fraser Valley Regional District and Regional District of the North Okanagan to our dispatch service. Our goal is to provide the best possible service to all partners.

Looking back to the last quarter of 2018, our focus was on completing and seeking approval of our new strategic plan—the roadmap that will help guide E-Comm for the next five to seven years.  Working with staff, our Board of Directors and stakeholders, we identified key commitments and the strategies to help move them forward for an even greater contribution to public safety in our province. Our new plan places emphasis on the mental health of our frontline staff, builds on existing relationships with police, fire and ambulance services and establishes new relationships that support our collective public safety mandates. We will also continue to work on major technology and operational initiatives to help us get ready for the next phase of 9-1-1 services. We expect to launch our new strategic plan this spring.

Also in the fall, the City of Burnaby became a shareholder in E-Comm after purchasing a Class A share for police services in November. They are now one of 24 Class A shareholders in
E-Comm, and it is the first share the city has purchased in the company, although the Burnaby RCMP has been using our E-Comm Wide-Area Radio Network since 2000.

In 2018, 9-1-1 call volume neared 1.6 million for the year. I am proud of our professional call takers who continue to exceed our goal of answering 95 per cent of those 9-1-1 calls in five seconds or less. In fact, our service level for answering 9-1-1 calls in 2018 was 98 per cent. Their dedication and the effectiveness of our service was evidenced by the massive influx of calls on December 20 when high winds hit the South Coast. Over a 12-hour period starting at 7 a.m., we received nearly 6,000 9-1-1 calls—more than double the amount we receive on a regular Thursday during those hours.

On one final note, on behalf of the board, I wish to welcome Maple Ridge Mayor Mike Morden (representing the cities of Maple Ridge and Pitt Meadows) to the Board of Directors. 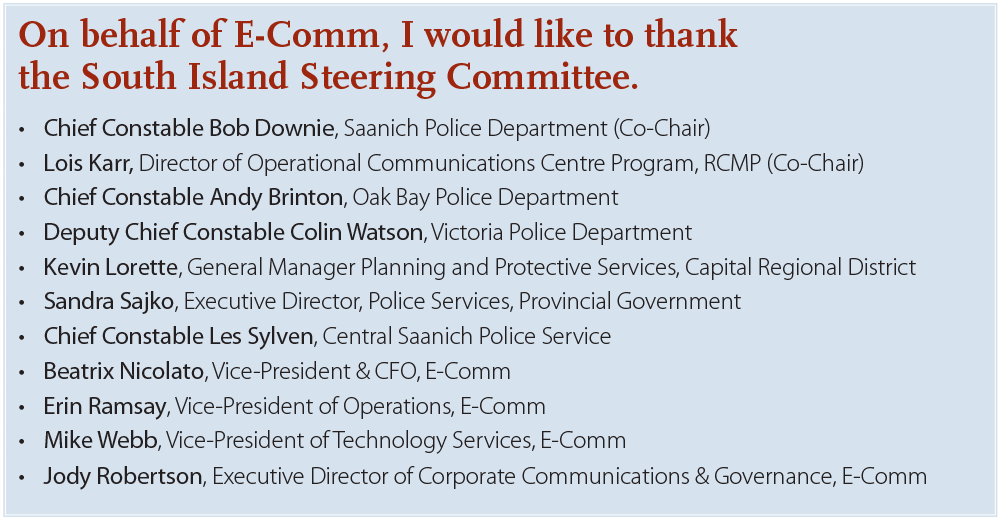 Situations such as plane crashes, train derailments and high-rise building fires require a coordinated, multi-agency emergency response. That’s why E-Comm participated in three exercises in November to test how various emergency partners would react to such incidents.

Each exercise provided E-Comm an opportunity to collaborate and share ideas with emergency services partners and to show how E-Comm’s Wide-Area Radio Network would help police officers, firefighters and paramedics communicate with each other during a major incident.

Vancouver International Airport (YVR) kicked off its annual crisis scenario planning on November 14, with a hypothetical situation of a full aircraft forced to make an emergency landing and then becoming engulfed in flames on the runway. E-Comm joined close to 100 individuals from more than 30 government organizations and public safety agencies, including its dispatch partners Richmond RCMP and Richmond Fire-Rescue, to discuss
inter-agency priorities, joint-response efforts, emergency operations communication and coordination in the event of a crash at YVR.

“Over the years E-Comm has developed detailed emergency response plans, and tabletop exercises are a great opportunity not only to put our resources to the test, but to connect with professionals from other public safety agencies and share ideas,” said E-Comm Emergency Communications Centre Manager Marc McAdam, who participated in the exercise.

On November 20, E-Comm collaborated with Langley City Fire Rescue Service, Township of Langley Fire Department, Surrey Fire Service, the RCMP and BC Emergency Health Services to conduct a tabletop exercise with interoperability in mind. This theoretical scenario involved a vehicle and train collision that sparks a fire. Representatives from nearly three dozen organizations from all levels of emergency services and local government worked together to better understand how to optimize their responses and the importance of using E-Comm’s radio channels during major incidents.

Interoperability (the ability for first responders to talk to each other on radios) was also a key theme of the high-rise fire exercise on November 21. E-Comm joined six fire departments (Coquitlam Fire/Rescue, Port Moody Fire-Rescue, New Westminster Fire & Rescue Services, Delta Fire & Emergency Services, Port Coquitlam Fire & Emergency Services and Burnaby Fire Department) in a hypothetical scenario of a large-scale fire at the top of a high-rise building. This exercise focused on how fire crews from multiple departments would be dispatched and managed via E-Comm’s different radio channels. “Practicing how all agencies would respond to large-scale incidents is extremely valuable,” said Dave Mitchell, E-Comm’s director of Fire Services. “While such major incidents are rare, there’s massive value in understanding how every agency would coordinate how they would respond.”

More than 30 police, fire and ambulance agencies within Metro Vancouver and parts of the Fraser Valley are proudly communicating on E-Comm’s Wide-Area Radio Network, the largest multi-jurisdictional, tri-service emergency radio system in B.C.

Both events provided industry experts and dedicated professionals the opportunities to share ideas and discuss industry topics through a wide variety of presentations related to public safety communications.

Among the sessions at APCO, E-Comm Report Agents Shari Thomas and Meghan Valli presented a seminar on the “Impacts of Dementia in Public Safety,” providing an overview of dementia and Alzheimer’s, information on how to recognizing a person with the illness and how to manage such calls.  Joining them at the conference to represent E-Comm were Fire Training Specialist Melissa McPherson, Enterprise Systems Technologist Robert Wong and Emergency Communications Centre Supervisor George Raitt.

“APCO was a great opportunity to learn about how other agencies are working with P25 wireless radio technology, Next Generation 9-1-1 (NG9-1-1) and other IT projects,” said Wong.

“It’s always important to connect and share ideas with our counterparts across the public safety community,” said Webb.  “We can all learn from each other best practices and new approaches for the delivery of essential communications services.  Ultimately, it is about developing the best ways for first responders to communicate with each other as they fight crime, safe lives and protect property.”

E-Comm attends a number of community events throughout the year to connect with British Columbia’s neighbourhoods and to share public safety information and 9-1-1 tips.

* Total number of 9-1-1 calls for Metro Vancouver and 24 other regional districts and communities spanning from Vancouver Island to the Alberta and U.S. borders to north of Prince George. 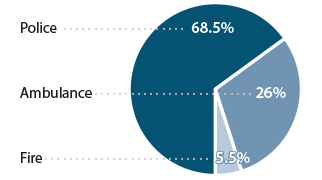