Vancouver, B.C. – The Association of Public-Safety Communications Officials (APCO) Canada has named E-Comm the recipient of two national awards – Trainer of the Year and the Teamwork Award – for exemplary efforts in emergency communications through a challenging year for the organization in 2021.

Each year, at the APCO Canada Conference & Tradeshow, a number of awards are issued recognizing telecommunicators, technologists, trainers and teams who demonstrate excellence and leadership in their dedication to public safety. Nominees may have used uncommon methods to problem solve during an emergency call, worked as a team to create a solution to an unexpected event, or were instrumental in making a difference in the outcome of a critical incident.

One of E-Comm’s Vancouver Island-based Training Specialists, Nicole Israel, was named APCO’s Trainer of the Year for her work adapting the centre’s training curriculums to include specialized classes designed to teach multiple skillsets simultaneously. This was done in response to a growing need for cross-trained staff as pressures from COVID-19 and the extreme weather events faced across British Columbia led to increased demand for emergency services. Israel went above and beyond to ensure the training programs adhered to adult-learning best practices, including using gamification in her modules, while providing outside-of-the-box opportunities for learners to get real-life experiences with tools and file types in a learning environment.

E-Comm was also presented with the 2022 Teamwork Award for its Operations team’s response to the 2021 heat dome event. In late June, emergency response providers were stretched beyond their limits when the province experienced an unprecedented heat dome where temperatures soared as high as 50 degrees Celsius in some parts of the province.

When temperatures rose, so did calls to 9-1-1, peaking at unprecedented more than 8,000 calls a day during the height of the heat dome. As a consolidated emergency communications centre, E-Comm handles 99 per cent of 9-1-1 calls in B.C., with 9-1-1 call takers immediately transferring callers to the emergency response agency of request. However, during this extended tragic and heart-breaking crisis, 9-1-1 call takers waited on the line for extended periods with callers in distress as the BC Ambulance Service was overwhelmed by the heightened demand. In some instances, E-Comm call takers stayed on the line listening to multiple people pass during one shift. Despite this, staff found the courage, resilience and perseverance to come back and do it all again each day during the crisis – all in the name of public safety.

All members of the Operations team worked tirelessly, 24 hours a day, throughout the heat event to support the overwhelmed ambulance service. The level of coordinated effort was extraordinary and required unique problem-solving skills and work-around processes to support public safety, many of which remain in place today. 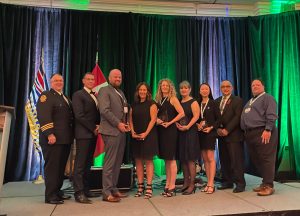 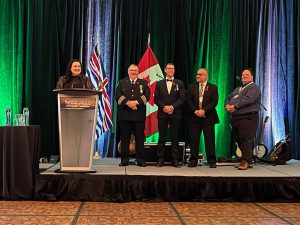 APCO’s Trainer of the Year Nicole is accepting the award on stage at APCO Canada.

E-Comm 9-1-1 is the first point of contact for 9-1-1 callers in 25 regional districts in British Columbia and provides dispatch services for more than 70 police agencies and fire departments across the province. E‐Comm also owns and operates the largest multi‐jurisdictional, tri‐service, wide‐area radio network in the province used by police, fire and ambulance personnel throughout Metro Vancouver and parts of the Fraser Valley.