Vancouver, B.C. – A fast food restaurant not being open 24-hours-a-day as advertised, a retailer not accepting a return of shoes without the original box and a gas station attendant putting the wrong type of fuel in a vehicle are examples of consumer complaint calls received by E-Comm, B.C.’s largest 9-1-1 centre, in 2018.

E-Comm has released its annual top 10 list of calls that don’t belong on 9-1-1 and is again imploring people not to tie up lifelines.

In addition to consumer complaints, questions about vehicle malfunctions made their way to 9-1-1 lines this year including someone calling to find out how to turn off their vehicle headlights and another caller reporting that their wiper blades were broken.

Call taker Heather Andrews handled the number one call on this year’s list and said when someone calls 9-1-1 just to complain about customer service at a business, time is taken away from helping people with real life safety issues. “This type of call ties up our ability to help people with real emergencies,” said Andrews. “Dealing with a complaint about the opening hours of a restaurant is a call that doesn’t belong on 9-1-1.”

Call taker Kayla Ryan handled a question about a retailer not accepting a return of shoes without the original box. “We are here to help people in emergency situations,” said Ryan. “When someone calls 9-1-1 for general information, we still have to confirm the person is safe before completing the call. Calling the police to complain about a store’s return policy isn’t a reason to call 9-1-1.”

E-Comm reminds the public that 9-1-1 is for police, fire or medical emergencies when immediate response is needed. “Most people use 9-1-1 responsibly,” said Jasmine Bradley, E-Comm Corporate Communications manager. “But calls such as those on this year’s headscratcher list waste valuable emergency resources that would otherwise be available to someone whose health, safety or property was in jeopardy or a crime was in progress.”

E-Comm is the largest 9-1-1 call centre in B.C. From January to the end of November 2018, E-Comm handled more than 1.45 million 9-1-1 calls (92 per cent of B.C.’s 9-1-1 call volume) for regional districts and communities spanning from Vancouver Island to Alberta and from the U.S. border, to north of Prince George. E-Comm also provides call-taking and dispatch services to 36 police agencies and fire departments in southwest B.C. and operates the largest multi-jurisdictional, tri-service emergency radio system in the province.

Photo of Heather Andrews – E-Comm call taker who answered the number one call on this year’s list. 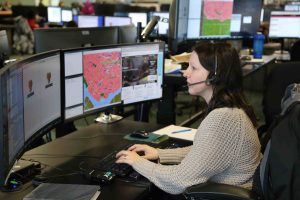